Fiscal constraints make Caribbean governments anxious to source grant funding to address increasing climate related damages. Application for these funds is often met with a number of requirements including for funding to address climate change impacts, versus developmental costs that relate to the

Extreme hurricane waves are predicted to increase from pre-1993 levels, with pre-1993 100-year return period waves offshore Kingston, Jamaica predicted to increase from approximately six meters to over 10 meters. Revetments and dunes that existed and provided economic service to road and air transport infrastructure have already been shown to be deficient. Climate change adaption cost will therefore require strengthening of existing revetments (approximately

USD15 Million in development costs) and replacing some with stronger revetments and dunes (USD 27 million in climate change costs).  In other words, while a revetment was always required to address underlying natural hazards, the incremental increase can be attributed to both exiting and projected changes. 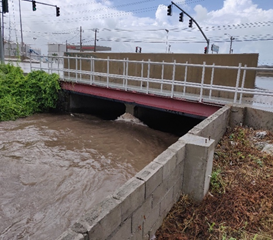 Flooding from extreme rainfall has increased and will continue to increase. IPCC projects up to 12 per cent increase in present climate five-to-100-year return period rainfalls. While this can appear to be a modest increase, urban drainage that is faced with both developmental pressures as well as increased hydrological requirements can be overwhelmed in the most frequent two-to-five-year events. In the case of Kingston, a two per cent increase in runoff can be attributed to increased urbanization, however, climate change perturbations result in 12 per cent. Proportioning of a projected USD45 million price tag to can therefore reference these changes as a first cut. 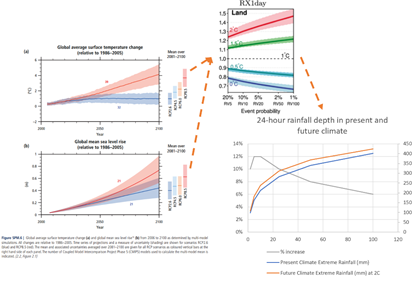 Natural hazards have always been with us and society places increased demands on infrastructure. Defining climate change related costs requires understanding of both natural hazards and societal demands, and undertaking a process of defining those costs. CEAC utilizes a basic system for deriving costs. Defining the pre-climate change and societal requirements and comparing these with the existing infrastructure capacity is the first step. Improvements to address these needs are essentially developmental needs. Next, define the post-climate change needs and costs. The difference between these two costs is in essence the climate change related costs.