Opportunities and challenges in construction of steel frame office buildings

Recently in Jamaica, numerous large buildings have been erected quickly as a result of steel frame construction. While this method of construction presents many opportunities including fast erection, flexibility in design, and durability, it also comes with unique challenges that must be addressed before and during construction. Some of these challenges include openings in the steel frame and running HVAC and water services. In 2019, CEAC Solutions began monitoring the construction of the Ferry BPO facility, a 60,000 sq. ft. commercial building which was also designed by CEAC. During the construction monitoring process, our team identified and resolved many of these challenges. 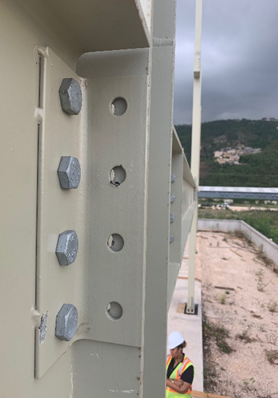 In an industry where time equals money, the most notable advantage of steel frame construction is its fast erection. A small steel building can be erected within a few days with a crew of as little as five persons, as all the members come pre-cut and ready to assemble on site. In cases where the building is not supplied by a local company, however, the lead time on delivery of missing or faulty members can be an issue.

When assembling the Ferry BPO Facility, there were several missing members which took anywhere from one to three weeks to arrive in Jamaica from the overseas supplier. Even with these delays, the structure took just over two months to erect, which is a fraction of the time it would have taken to erect its reinforced concrete equivalent. In a few instances, missing or faulty members could be fabricated or remedied on site to reduce this lead time. A few beams, for instance, had bolt holes that were misaligned with the accompanying column. This was remedied on site by drilling new holes in the correct locations.

To avoid costly mistakes during construction, it is important to coordinate with the building supplier on openings in the steel frame structure for windows and doors. If improperly designed, these openings could pose a threat to the sealing of the structure and introduce the possibility of water damage and mould, which was nearly the case with the BPO facility. The steel frame of the Ferry building was not designed to accommodate the large format windows and doors, and so, the supplier took it as given that the client would use independently supported frames to house them. To rectify this design deficiency, the construction team fabricated and welded individual window frames externally to the building, a less than ideal solution as it is important to limit the building’s exposure to extreme heat such as that generated during welding. Once the frames were mounted, all gaps had to be filled with silicone to prevent any possibility of water infiltration. If these frames had been included in the original design such a tedious and expensive exercise could have been avoided. It is also important to note that possible gaps  where eternal exposed beams and columns meet should also be discussed with the manufacturer in order to minimise if not completely remove their occurrence in the structure.

Since HVAC and Plumbing services are essential to the operation of any habitable space, allowances for the installation of these in the design of the structure is critical. Depending on the HVAC system, several vents for intake and exhaust as well as shafts to externally housed units may be necessary for its operation. When accounted for in the design of the structure these openings can be pre-cut by the manufacturer to prevent possible construction mistakes. In the case of Ferry BPO the intake and exhaust ducts were not included in the building design and had to be cut out of the cladding on site. This opened up the possibility 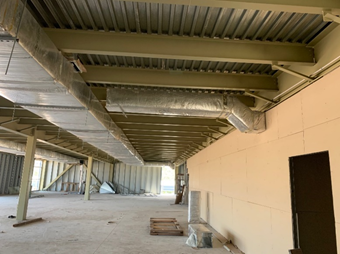 of human error which could be costly as the cladding pieces cannot be repaired if cut incorrectly, but instead would have to be replaced. Another point to consider is the layout of ducts in the ceiling. Depending on the type of HVAC system, air conditioning ducts may have to cross under the major beams of the structure using up several feet of ceiling height where they cross. If considered in the design phase, web openings in the members could have been used to prevent this occurrence.

The design and construction process of the Ferry BPO Facility has proven that steel frame buildings afford a client flexibility of design, durability and fast erection time, however, improper design and manufacturing pose possible threats to these advantages. When designing a steel frame structure, it is important to consider the building holistically to ensure its interaction with its openings, HVAC and plumbing services are properly accounted for.